Are you learning Koine Greek, the Greek of the New Testament and most other post-classical Greek texts? Whatever your level, use this forum to discuss all things Koine, Biblical or otherwise, including grammar, textbook talk, difficult passages, and more.
Post Reply
13 posts • Page 1 of 1

I think that ἐμβάψας is a hyperbaton adjective, jumping over μετ' ἐμοῦ ἐν τῷ τρυβλίῳ connected to χεῖρα, whereas οὗτός με παραδώσει is the predicate, and as such determines the action and meaning of the whole phrase. However the key thing here, is that ἐμβάψας is in aorist subjunctive (something that may probably happen at some unspecified point, not in the past) instead of in aorist indicative (something that definetely happened in the past). On second thought, it looks like an aorist active male infinitive instead, looking at the Aorist table at https://en.wiktionary.org/wiki/%CE%B2%C ... ient_Greek, but the prior reasoning with aorist subjunctive vs aorist indicative is something that occurs often in NT, and aorist alone does not guarantee that something happened in the past but at an unspecified (aorist/ἀόριστος) time.

As for κόλπος when applied to people it means either bosom (in between the breasts) for females and any kind of cavity for males, and in the particular case as it's κόλπον αὐτοῦ χεῖρας it's the cavity of his hand/closed fist, the second case being a bit more vague as τὴν χεῖρα ἐν τῷ κόλπῳ αὐτοῦ, in which case it most probably means hand in his lap (in between the thighs) or could also be pocket. If more than one people, it would mean in between people.

https://biblehub.com/multi/proverbs/19-24.htm has a long list of translations, where it looks like the 'dish' translation has been carried over from the older English translations (King James etc), but it can't possibly mean dish, as apart from the earlier and later stages Greek meanings of the word meaning cavity or gulf, there are other biblical examples of persons having stuff in their κόλπον with no food and/or eating being involved e.g. ΕΥΑΓΓΕΛΙΟΝ ΚΑΤΑ ΙΩΑΝΝΗΝ 1 - l. 18 ὁ μονογενὴς υἱὸς ὁ ὢν εἰς τὸν κόλπον τοῦ πατρός (lap).
Last edited by hellenist on Fri Jul 29, 2022 7:54 am, edited 3 times in total.
Γηράσκω δ' ἀεὶ πολλὰ διδασκόμενος.
Top

Participles do not have moods and there is no aorist subjunctive participle.

"In the Hebrew". κόλπος is not dish in Greek. However, here it is being used to translate the Hebrew word for dish for some reason. In 2Ki 21:13, the LXX translates the same Hebrew word as ἀλάβαστρος. Given the similarity of the rest, there are several possibilities, I think, if Matthew had Proverbs in mind. It could be that Matthew is either thinking of the Hebrew source or a slightly different Greek version than our LXX text gives.
"Here stuck the great stupid boys, who for the life of them could never master the accidence..."

Yeah they don't and there isn't, the bit where I mention 'an aorist active male infinitive instead' is an alternative to the mood explanation.

As for meaning dish 'in Hebrew' the way that I understand you meant it as, is that the κόλπος word acquired an extra meaning between the hellenised Jews, that of 'dish', but had that been the case the meaning would have been carried over in later stages of the Greek language due to the meaning existing in the holy scriptures.
Γηράσκω δ' ἀεὶ πολλὰ διδασκόμενος.
Top

More than an "alternative."

To be clearer on κόλπος, as I was not saying that at all: The LXX Greek of Proverbs is a translation from a Hebrew original. For some reason, the Proverbs translator has twice used κόλπος to translate bowl here. But that doesn't matter when evaluating any Matthew parallel, as Matthew speaks of a τρύβλιον, not a κόλπος, which would parallel the Hebrew (if he is following it) much more closely.

The Greek of the rest of the verse shows why Matthew might have been thinking of one or both of these verses, and also help to answer the question of what it's supposed to mean, and the use of χεῖρα (rather than sop, as Powell objects to).

Why does Matt 26:23 read as a gnomic utterance, a specific individual, when everyone is dipping into the bowl? Why "hand"? My answer here is that maybe it's based off a gnomic utterance (in Proverbs) and is another instance of Matthew's well-established pattern of filling in the details that his main source Mark does not include, from creative thinking about short segments of Hebrew scripture.
"Here stuck the great stupid boys, who for the life of them could never master the accidence..."

More than an "alternative."

No probs; good to know.


For some reason, the author has twice used κόλπος to translate bowl here.

Ok, but what makes you certain that it is 'bowl' that κόλπος is being used for? What I'm trying to say is, is this being determined from the original Hebrew text, or from the text of the Greek translation itself? Plus, as it's pointed out Matthew speaks of a τρύβλιον (when referring to dish), not a κόλπος (the latter was part of the similar looking examples that followed).


a specific individual, when everyone is dipping into the bowl? Why "hand"?

I'd say because its ἐμβάψας μετ' ἐμοῦ, so either at the very same time with and/or dipping in the same bowl, using his hand for the dipping; but gnomic utterance (non-specific) and creative thinking are possible if not plausible.
Γηράσκω δ' ἀεὶ πολλὰ διδασκόμενος.
Top

is this being determined from the original Hebrew text, or from the text of the Greek translation itself?

Google tells me that the Hebrew is:

Now, I don't have much in the way of Hebrew, but that 4th word (from the right) looks strangely similar to the name of this restaurant in Rehovot. 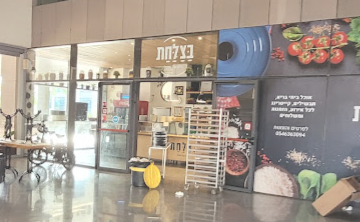 Hopefully Barry or someone could chime in?

Yes, this is humor.
"Here stuck the great stupid boys, who for the life of them could never master the accidence..."

Looks likely -> Google translate of the Hebrew text (I hope this wasn't an English rendering of the text put in Google translate to get the Hebrew, and in turn I put the Hebrew text to get the English back!) -> He buried his lazy hand in the plate, even to his mouth, he wouldn't listen. Even in that case though, it can be argued that this was a mistranslation, rather than the word 'κόλπον' meaning dish in Hebrew (vs the Hebrew word for 'dish' having been translated as 'κόλπον' in the LXX Greek).
Γηράσκω δ' ἀεὶ πολλὰ διδασκόμενος.
Top

I see now where you misunderstood me. κόλπος has no meaning in Hebrew. You'll notice that it's written in Greek characters. It's a Greek word. It's not a Hebrew word. My statement, originally and throughout is that κόλπος is the translation for בצלחת, which means dish ("in the bowl") in Hebrew.
"Here stuck the great stupid boys, who for the life of them could never master the accidence..."

Yeah the way I read κόλπος is a "a dish" in the Hebrew, was that the word κόλπος carried over the meaning of dish from Hebrew.

I've split these posts off.

I would ask you to read more carefully in the future. See the top post in this thread:


"In the Hebrew". κόλπος is not dish in Greek. However, here it is being used to translate the Hebrew word for dish for some reason.

"Here stuck the great stupid boys, who for the life of them could never master the accidence..."

Sorry but the part where I am quoted on what I read the text as, refers to κόλπος is a "a dish" in the Hebrew, apparently that you posted in the thread viewtopic.php?p=221016#p221016 where you split the current thread from, and not from your subsequent posts. I contacted you in private to apologise in case you felt any offence during our discussion, you replied that you didn't, but it does not look like this is the case. So in any event, thank you, and I think that as a new member I'd respectfully rather avoid commenting on your posts in the future if this is how the reaction is going to be like.
Γηράσκω δ' ἀεὶ πολλὰ διδασκόμενος.
Top

That means, explicitly: κόλπος of the LXX is a "a dish" in the Hebrew of the Masoretic text.

It seems that you continued to misunderstand this original statement through most of this thread, long after there wasn't a good excuse for it. If I am belaboring that or any points, it's because it remains hard to tell what you understand now and what you don't. And I am trying to write, not just for you, but anyone else coming across this thread, trying to figure out what is going on in the future.

I didn't take offense, nor have I meant to say anything for you to take offense at. But if what you want is not to be disagreed with when you are wrong -- not even that roughly here -- you are looking for sycophants, not friends. As I try to tell everybody on these boards when there's hurt feelings, just hit me up for a Zoom call. Most upset on these boards, imo, is based on mistaken judgements of intention, due to the nature of text communications.
"Here stuck the great stupid boys, who for the life of them could never master the accidence..."

Return to “Koine and Biblical and Medieval Greek”