I've been reading the Martyrdom of Saint Coluthus. It is a short text, and a rather unusual martyrdom in that it consists almost entirely of a dialogue between Arianus, the governor, and Coluthus, the former trying to convince the latter he should sacrifice to pagan gods. Almost no narrative, no torture, nothing but the going forth between the two men.

Because of this, it seems the editors are more willing to accept the text as a genuine historical document, even going as far as making hypothesis as to how the proceedings of the trial might have been obtained by Christians. I'm not really convinced this is the case but it's not like my opinion matters anyway.

Overall, editors of Coptic martyrdoms/encomia/homilies are quick to dismiss the events they narrate as pure fiction (not always without cause of course), while I'm slightly more willing to accept that real events could have provided some basis for later embellishment. On the other hand, I find it harder to believe that dialogues and speech traveled so well over time and that martyrdoms are reliable witnesses for what was actually said.

Arianus comes out as a more balanced figure than magistrates in other martyrdoms. There is a Pilate-like quality to his attitude, something like "I'd really like to help you but you're not making it easy". At one point, he tries to convince Coluthus by adducing the exemple of two bishops who complied with the order to sacrifice. When this fails, he resorts to things like "life is a pleasant thing" and "if you don't do it for you, do it for these people who are crying":

(...) the governor turned to the holy Coluthus and said to him, 'Be sensible now, and do as you are told. There was Apollonius, the bishop of Siout; his people were most understanding about him, and took a dignified view of his prudence, since he did not wish to be disobedient, or to be brought to court and hear all of this rigmarole, but he proceeded of his own accord into the temple and sacrificed in full view of everyone, with the vessels of libation in his hand, standing there and offering up sacrifice; he is not at all ashamed, and every one honours him. Well now, speak to me Coluthus, and you shall be in special honour. (...)
As for you, Coluthus, it is a governor who is pleading with you, and advising you! The governorship has humbled itself for you. Let it be enough to have done what you have in the matter of the books, when you were persuaded by your God and did not burn them.
There was a man here today on a charge of murder. This man wants to live; but as for you, Coluthus, something evil possesses you, to make you destroy yourself with murderers! Don't you see the beauty of this pleasant weather? There will be no pleasure to come your way if you kill your own self. But listen to me and you will be saved.'

The holy Coluthus said to him, 'The death which is coming to me is more pleasant than the life which you would give me.' The governor said to him, 'So you do ot realize that I have authority to chastise you? Come now, use your reason like a sensible man, and listen to me.' The holy Coluthus said to him, 'Whoever listens to you will bring his own death upon himself. But I will not forsake my Lord Jesus Christ.' The governor said to him, 'Look at all these people with their tears streaming don as they see you standing on the tribunal - and you have shown no pity on your own self, but you are disobediant. Now, listen to me and sacrifice, and you shall live.' The saint said to him, 'This life is indeed no life to me, but death'.

The text has been edited and translated in Reymond & Barns, Four Martyrdoms from the Pierpont Morgan Coptic Codices (1973). It is one of these rare editions of Coptic texts that have the advantage of being both cheap and easily available, so if you're looking for a physical book to do some Coptic reading, you could do much worse than getting a copy.
One caveat though, the Coptic text is handwritten, which is no big deal since the handwriting is very clear, but maybe it would make things slightly harder for a beginner. 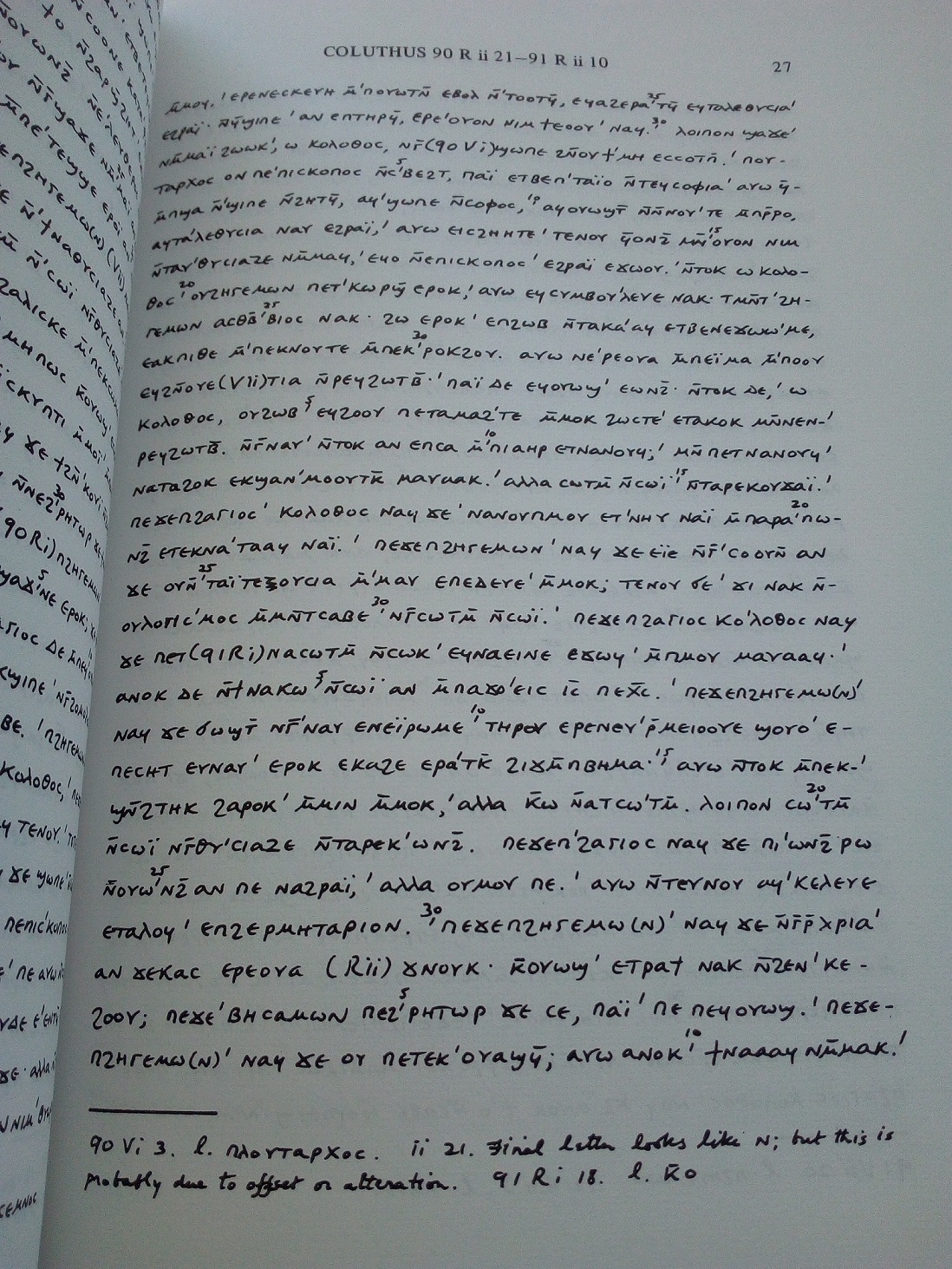 Yesterday I read bits of the Latin proconsular acts of the martyrdom of St. Cyprian and the 19th c. editor said something about how we can trust these to be a faithful account of what was said since Christians took great pains to gain access to the official records and copy them.
This reminded me of Coluthus because Reymond & Barns basically say the same to explain the sober and business-like form of his martyrdom, as opposed to other Coptic texts.

Thing is, I have read enough articles and books in which academics pick up the only occurrence we have of something happening and still end up making it a hallmark of an entire society: basically, "one guy in Egypt did this in 1222 BC and this is the only attestation we have of such practice" can quickly become "Ancient Egyptians routinely did this over 3000 years".

So, does anyone know where we got the idea that Christians were accessing and copying the official minutes of their martyrs' trial? Was it really that widespread a practice?
Top

Might the “Acts of the Pagan Martyrs” be worth comparing? There too you have copies of apparent official minutes, “accounts of proceedings,” recording verbal court exchanges between some Alexandrian grandee and the Roman emperor. There’s a relatively early one featuring the emperor Claudius, which ends with the execution of an openly disrespectful Alexandrian gymnasiarch and his colleague, and there are a dozen or so others. Local patriotic anti-Roman propaganda (coupled with some crude antisemitism), evidently. Relations between the Alexandrian senate and the Roman emperor could be strained, to say the least, as Caracalla's bloody visit in 215 goes to show. The dates of the proceedings themselves range from 1st to later 2nd cent., but the copies were in later circulation, used presumably to foster anti-imperial sentiment. They’ve been taken as faithful records but it's surely more probable they're largely fictive, albeit with a factual core (since we know from other sources that the emperors in question did visit then), and the distinction between fact and fiction breaks down readily in propaganda.

While I’m writing, let me venture a comment on your ingenious hypothesis about Isauria. It’s obviously very attractive (though I don’t have the Coptic to control it, let alone the Arabic), but it seems to me that Diodorus’ description of Antinoe’s riches could be enough to nullify the apparent discrepancy between the Coptic and the Arabic. That’s not to say you’re wrong of course.
Antinous and his posthumous worship have always intrigued me. Only in Egypt!

You’ve not enticed me into mastering Coptic, but I do enjoy your posts. So thanks!
Top

Thanks for the reference to the Acts of the Pagan Martyrs! I'll make sure to check them.


You’ve not enticed me into mastering Coptic, but I do enjoy your posts. So thanks!

You're welcome! I can't blame you for not succumbing (yet!) to the Coptic sirens. My enjoyment comes in no small part from the language itself, but is is true that the literature cannot compete in breadth and depth with Latin or Greek.
Top
Post Reply
4 posts • Page 1 of 1