This board is a composition workshop, like a writers' workshop: post your work with questions about style or vocabulary, comment on other people's work, post composition challenges on some topic or form, or just dazzle us with your inventive use of galliambics.
Post Reply
5 posts • Page 1 of 1 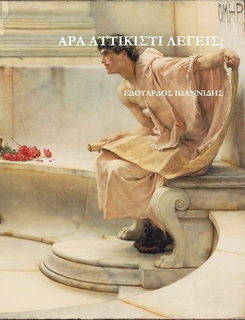 I know you can't change the text if it was by Eduard Johnson, but I was surprised to see on p. 68 Βερόλινον and Λόνδινον, as Modern Greek forms (ὀνόματα ἀπὸ τοῦ νῦν ἐκ τῆς νέας ἑλληνικῆς). In accordance with their source accentuation (Latin Berolinum and Londinium), these are Βερολίνον and Λονδίνον in Modern Greek, and always have been. Was this a typo, or in Johnson's original?

You may have gathered by now that I find this all more interesting for what it teaches me about older Modern Greek than Ancient Greek; and given our current offline discussions on the Lexicon, I'm happy to see p. 66 confirm κλειδοκύμβαλον for piano

. θειαφοκέριον on p. 67 was new to me, and it is indeed an early 19th century word for "match" (which is more Hellenic than the normal Modern word σπίρτο < Italian spirito, with a somewhat covert extension from alcohol to lighting fires).

There's two problems with using it as the Ancient Greek for "match". One, which is minor, is that the word is also used in Modern Greek for, literally, a candle with a sulphur wick, and that appears to be the surviving meaning; https://www.ampelourgos.gr/forum/οίνος/ ... ρισ-χημικα describes disinfecting wine barrels with it.

One, which is somewhat less minor, is that θειάφιον is Byzantine/Modern for "sulphur", and if you want these words to look Attic, you might want to rearchaise it to θειοκέριον.
Top

Return to “Composition Board”