It is well know that the second finite Hebrew verb in Exodus 3:14 MT, אֶֽהְיֶ֖ה אֲשֶׁ֣ר אֶֽהְיֶ֑ה is rendered by the substantive participle ὁ ὤν rather than the equivalent finite form in Greek, εἰμί, despite the fact that the first אהיה, identical to the second, is translated using εἰμί. Different explanations in the history of interpretation have been given. One is that Greek has trouble with such direct equivalencies, although one sees directly corresponding subjects and predicates throughout Greek literature, so this explanation is unlikely. More plausible is that the translators, possibly influenced by neo-Platonism, are giving an interpretive paraphrase to make it a statement of God's absolute existence. The writer of Revelation (traditionally John the apostle) certainly seems to have LXX 3:14 in mind in Rev 1:4:

There treated as indeclinable, perhaps to emphasize that he is using a form of the divine name.

I believe the the writer of John also has the divine name LXX in mind at John 1:18, particularly as we consider the superior reading θεός vs. υἱός. Even if υἱός is read, the language connects to Ex 3:14 and further underscores the apostle's emphasis on the divine nature of the Logos begun in 1:1 of the prologue. This forms a ring composition which strengthens the theme, concludes the prologue and provides the transition to the narrative portions of John.

by jeidsath
Does the world really need another thread about this?

However, could be more specific?

by jeidsath
Philo and the Septuagint uses ὁ ὢν consistently to mean God. Paul too, though not quite the same way.

But there is one exception, which the TLG tells me that I was miss-remembering. Not 2 John, but the Gospel of John itself (was I thinking "secundum"?):

Out of all of the authors in the TLG, John is the one exception who uses ὁ ὢν as a more normal expression. So in Philo, John 1:18 would have meant exactly what you say it does. But in John, the "he who is" pattern is far more standard. And it becomes easy to see why a scribe familiar with the Septuagint (and Philo?) would have changed υἱός to θεός.

by Barry Hofstetter
Thanks, Joel, that's great feedback, and any developed writing on the subject would have to interact with all this. Philo, of course, roughly contemporaneous with the composition of the NT writings, and whether or not he influenced any of the NT authors directly (now that's a hotly debated topic), at the very least he shows a developing strain in Judaism apart from the influence of Christianity (but very much influenced by Plato!), which shows some similar themes. I really don't want a theological discussion, but very interested in the use of language and intertextuality.

With the acquisition of 𝔓66 and 𝔓75, both of which read θεός, the external support of this reading has been notably strengthened. A majority of the Committee regarded the reading μονογενὴς υἱός, which undoubtedly is easier than μονογενὴς θεός, to be the result of scribal assimilation to Jn 3:16, 18; 1 Jn 4:9. The anarthrous use of θεός (cf. 1:1) appears to be more primitive. There is no reason why the article should have been deleted, and when υἱός supplanted θεός it would certainly have been added. The shortest reading, ὁ μονογενής, while attractive because of internal considerations, is too poorly attested for acceptance as the text.

Some modern commentators take μονογενής as a noun and punctuate so as to have three distinct designations of him who makes God known (μονογενής, θεός, ὁ ὢν εἰς τὸν κόλπον τοῦ πατρὸς …).

(It is doubtful that the author would have written μονογενὴς θεός, which may be a primitive, transcriptional error in the Alexandrian tradition (Υς/Θς). At least a {D} decision would be preferable. A.W.)

by jeidsath
For a more detailed version of the argument, see Hort's Two Disserations. Here he is on the possibility of a transcriptional error. 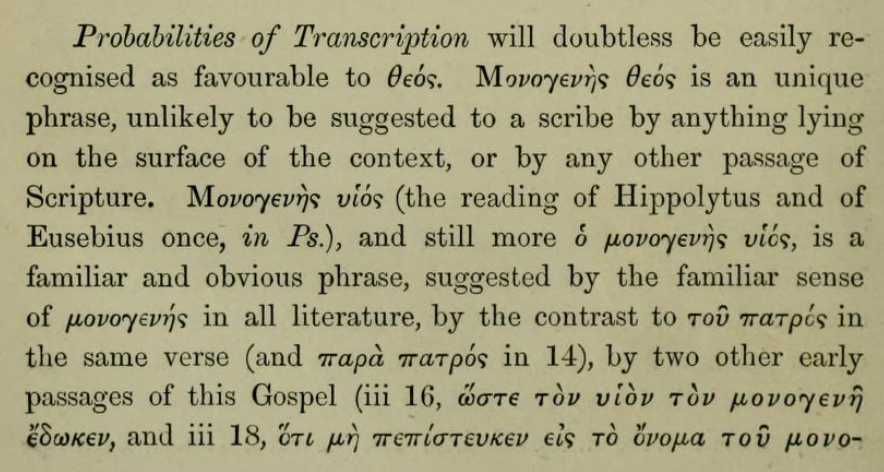 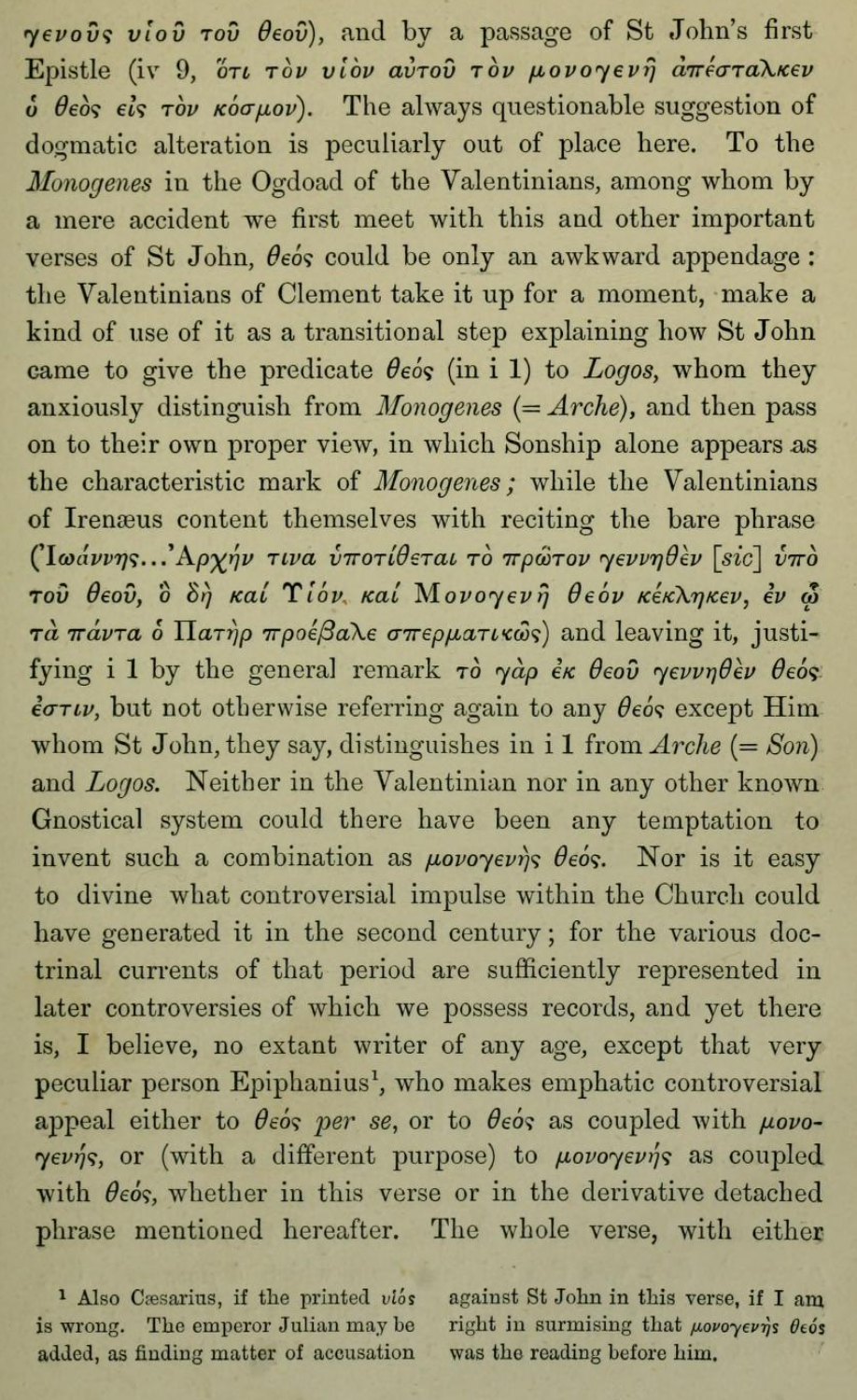 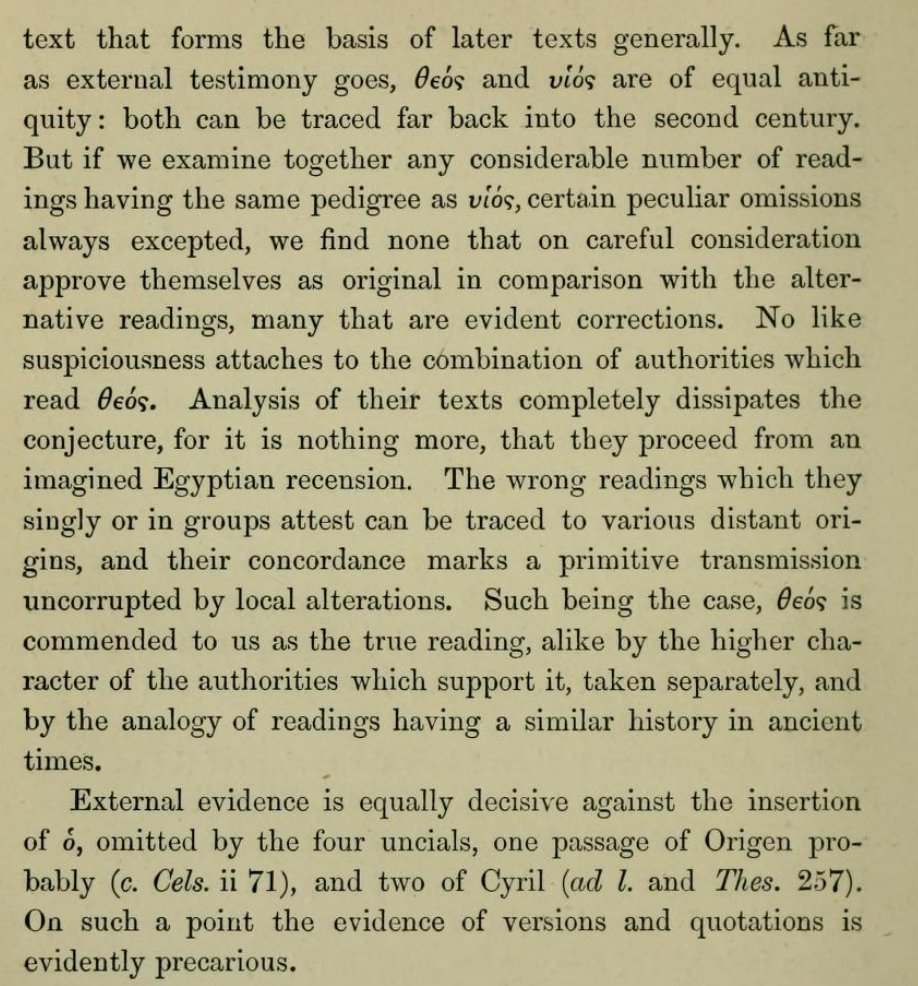 Basically, the riddle has been, why would υιος have been changed to θεος? The other direction is clear. θεος is corrected to υιος because of μονογενης. μονογενης θεος is too weird and must be original.

But here we have a candidate answer: Assimilation not to μονογενης, but to ο ων.

by Barry Hofstetter
I have no idea what you mean by "candidate answer." Do note, however, that there is better manuscript support for the reading than there was in W&H's time.
All times are UTC
Page 1 of 1