Are you reading Homeric Greek? Whether you are a total beginner or an advanced Homerist, here you can meet kindred spirits. Besides Homer, use this board for all things early Greek poetry.
Post Reply
8 posts • Page 1 of 1

Does anyone know anything about Richard John Cunliffe's biography? I'm having trouble discovering anything about him beyond his publication list and the fact that he had a daughter, Mary Cunliffe.
Joel Eidsath -- jeidsath@gmail.com
Top

Nothing in any of the dictionaries of classicists?
(Occasionally) Working on the following tutorials:

Apparently not. A librarian at Berkeley checked for me.
Joel Eidsath -- jeidsath@gmail.com
Top

A google scholar search turns up nothing. I'd expect that one of the classical studies journals would have run an obituary for him.
Top

just the blurb on the back of my copy: 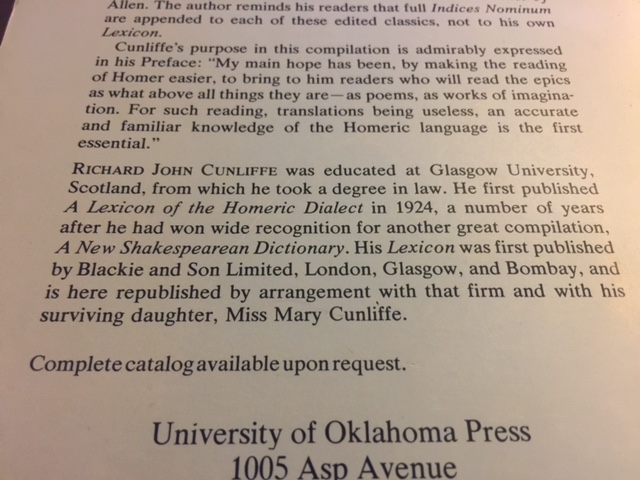 Yes, the above blurb is almost all that I have got.


Application and testimonials of Richard John Cunliffe, M.A., LL.B., for Additional Examinership for Degrees in Arts and Law, in Jurisprudence, Public and Private International Law, and Constitutional Law and History.

In 1916 he applied for (but did not get) the Glasgow Chair of Conveyancing. His application was under the name "John Richard Cunliffe" and exists at GUL Sp Coll Mu21-a.3.

Unfortunately I don't know the date of his birth or death, except that it was before 1963 when his Lexicon was reprinted.
Joel Eidsath -- jeidsath@gmail.com
Top